Sleep apnea syndrome (or obstructive sleep apnea syndrome – OSAS, central sleep apnea syndrome – SCAS) is a condition that occurs periodically or constantly repeated during sleep, in which complete or partial cessation of breathing occurs. For many years, this symptom complex has been considered not only as a delicate problem that leads to a deterioration in the quality of sleep of the patient and those around him. Apnea is considered one of the main risk factors for the development of such health-threatening disorders as hypertension, arrhythmias, and vascular disasters (myocardial infarction, stroke). That is why not only somnologists, but also cardiologists, arrhythmologists, psychologists and neurologists are working on the issue of eliminating this syndrome.

Why does sleep apnea develop? How does it manifest itself and what are its consequences? How is this syndrome manifested and treated? You will find answers to these questions in our article.

According to statistics, this disorder develops more often in people of mature and elderly age, but in some cases it is also present in children. According to some data, sleep apnea affects about one in ten women and one in four men aged 30-60 years. Moreover, the researchers note that the prevalence of this condition depends on the indicators of the frequency of arterial hypertension. In the group of patients with high blood pressure, the syndrome is detected in 26-40%, and among healthy people-in 0-12% (and this indicator increases with age).

Causes and mechanism of development

With this pathology, the walls of the upper respiratory tract quickly collapse, blocking the way to air — breathing is disrupted

With the normal structure of the oropharynx, the muscles of the soft palate and tongue (or the so-called pharyngeal ring) can support the upper respiratory tract in an open state. If this muscle ring relaxes, then the lumen subsides, and air can no longer freely pass into the trachea and bronchi. When you inhale, relaxed parts of the soft tissues of the oropharynx begin to vibrate and, hitting each other, create a sound that we used to call snoring. This mechanism of the snoring phenomenon leads to a decrease in the intake of air into the lungs and the development of hypoxia, which develops due to the intake of less oxygen in the body. Snoring can be the first symptom of many diseases that need to be monitored and treated by a specialist. This is how obstructive sleep apnea develops.

The main causes of sleep apnea can be the following diseases and factors::

There is evidence of a genetic predisposition to the development of sleep apnea.

Most often, for the first time, the development of sleep apnea syndrome is noticed not by the patient himself, but by his relatives. They are alarmed, and sometimes irritated, notice that in a dream the patient stops breathing and this moment is accompanied by snoring, which occurs periodically or almost immediately after falling asleep. Episodes of sleep apnea can recur constantly or occur after exposure to some external factors (for example, fatigue, taking alcohol or sleeping pills).

Contacting a specialist when snoring occurs is often postponed due to the existence of the idea that it is safe for health. However, experts warn that sleep apnea always requires treatment.

Conditionally, symptoms can be divided into 2 main groups: decreased sleep quality and pathological disorders in systems and organs due to increasing hypoxia and lack of sleep.

The quality of sleep in sleep apnea syndrome will change as follows:

Due to violations in the functioning of other systems and organs on the background of hypoxia, the patient has the following complaints and signs::

When examining a patient with sleep apnea syndrome, symptoms of damage to the cardiovascular system are mainly revealed: left and right ventricular hypertrophy, pulmonary hypertension and right ventricular failure. Often, these patients have a myocardial infarction and a violation of cerebral circulation (up to a stroke). Indicators of the probability of these vascular catastrophes in sleep apnea syndrome increase by 2-5 times. They usually occur in the morning hours.

Arterial hypertension among patients with this syndrome is detected in almost half of patients. Its development is promoted by increasing hypoxia, increased intracranial pressure, intermittent sleep and kidney pathology develops. Blood pressure increases in response to these changes due to vasoconstriction, which occurs in order to compensate for circulatory insufficiency in vital organs such as the brain and heart.

Increased blood pressure in patients with apnea syndrome has its own characteristic signs:

Another complication of the syndrome is an increased risk of injury with constant daytime drowsiness.

Can I diagnose sleep apnea on my own? 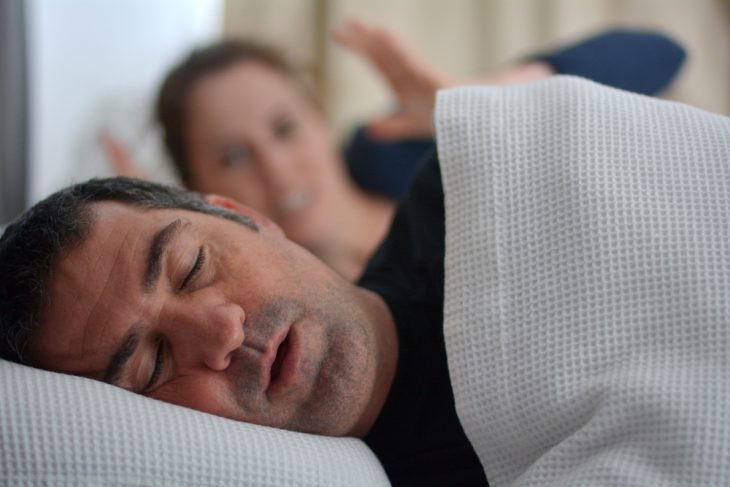 Relatives of a person suffering from obstructive sleep apnea, confirming the fact of his snoring and periodically occurring respiratory stops during sleep

Sometimes the patient does not have the opportunity to contact a somnologist, in such cases, attempts can be made to independently identify this condition. For this purpose, Italian specialists have developed a special screening questionnaire. Answers to her questions are awarded with points:

When summing up the scores of affirmative responses, indicator 4 indicates a 96% probability of having sleep apnea. If the results show less than 4 points, then the presence of the syndrome is estimated at 0 %.

The main goal in the diagnosis of apnea syndrome is to identify the root cause of its development. Often, when it occurs, patients first turn to a therapist, otolaryngologist, neurologist, cardiologist, sex therapist or psychiatrist. Suspect the development of this condition allow indirect signs, which are found out when analyzing the patient's complaints and examination.:

To clarify the diagnosis and assess the general state of health, the following studies are prescribed::

If the above-described disorders are detected, the somnologist has enough data to make a diagnosis of "sleep apnea syndrome". For a more detailed examination of the patient, the following methods can be used::

Of all the above methods of examining patients, the most highly informative is the PMG method,which is the "gold standard" for the diagnosis of OSAS.

If necessary, the examination plan is supplemented with methods that allow you to get a more detailed picture of the underlying disease, which leads to the development of sleep apnea syndrome. These data can be useful in developing a treatment plan to address the underlying cause of the syndrome.

The main part of treatment for sleep apnea syndrome is directed at eliminating the root cause of the disease.

To prevent episodes of sleep apnea, all patients are recommended to:

If pathologies of the upper respiratory tract are detected, the patient is recommended to consult and treat an otolaryngologist. To eliminate the existing problem, both conservative and surgical techniques can be used (adenoid or tonsillectomy, tracheostomy, resection of the soft palate and uvulopalatopharyngoplasty).

For medical treatment of sleep apnea, various sprays and anti-snoring pills may be recommended:

They contain natural ingredients that have anti-edematous, moisturizing, anti-inflammatory and anti-allergic effects. Some of them can cause sedation to normalize sleep. They help to partially cope with the problem of snoring and apnea, but may not be the only method of treating the syndrome.

If the treatment does not eliminate the manifestations of sleep apnea syndrome, the patient may be offered such a hardware technique as CPAP therapy (or Continuous Positive Airway Pressure). This method allows you to create positive pressure in the patient's airways, the presence of which prevents narrowing of the lumen in the pharyngeal ring.

Since 1981, CPAP therapy has become the most widespread and recognized worldwide as the most effective method to combat snoring and apnea. Studies show that when it is used for 12 years, the risk of death from the cardiovascular consequences of sleep apnea syndrome decreases by 10 times.

The device for performing CPAP therapy sessions is powered by a silent compressor, which is connected by a flexible hose to a breathing mask. During operation, the device supplies air to the patient's respiratory tract under a pressure of 4.5-20 mm of water column. With the help of a special regulator for each patient, before the session begins, the pressure necessary to maintain the pharyngeal ring in a straightened state is selected. The device can be used for part of the night or during the entire sleep period. As a result, apnea stops and the quality of sleep improves significantly. In addition, normalization of breathing can reduce the risk of developing dangerous complications. With prolonged use, the device has a beneficial effect on the muscles of the pharyngeal ring and helps restore their tone.

The device for CPAP therapy has small dimensions and weight, which allows you to take it with you on the road. There are no contraindications for use. It should be used with caution in patients with emphysema, sinusitis, past pneumothorax, pneumomediastinum, and liquorrhea. 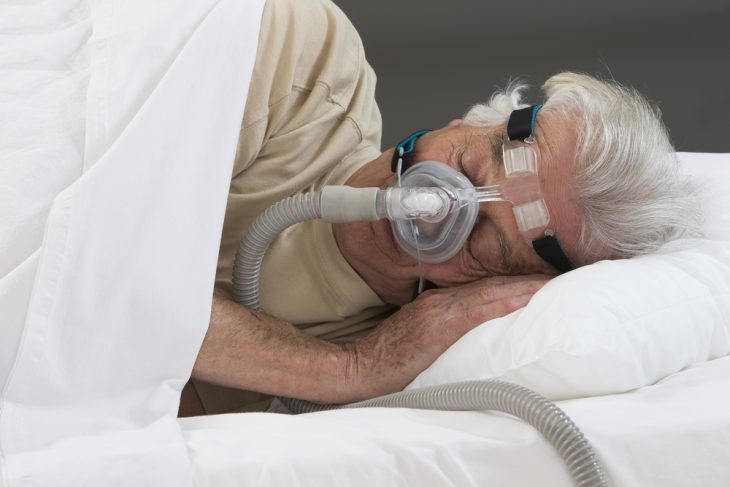 On the shelves of pharmacies, in online stores and specialized medical centers for the treatment of sleep apnea, you can find a lot of modern tools and gadgets to combat snoring:

In all cases of sleep apnea, you should not treat yourself by trying the remedies one by one. Each of them has its own indications and contraindications, advantages and disadvantages. The result of such self-treatment will be a waste of money, health and time. Only a qualified somnologist will be able to correctly identify the causes of snoring and choose an effective treatment. Over time, the doctor will "guide" the patient and, with any changes in his clinical condition, will change the treatment strategy.

If you experience frequent snoring, respiratory arrest during sleep, waking up in the middle of sleep, daytime sleepiness, you should consult a somnologist. After diagnosis, the patient may be recommended to consult a cardiologist, otolaryngologist, neurologist.

Sleep apnea syndrome is accompanied by partial or complete closure of the pharyngeal ring lumen and respiratory arrest during sleep due to vibration of the soft tissues of the palate and tongue root. This condition is accompanied by periodic or constant snoring, which is abruptly interrupted during respiratory arrest. It can lead to the development of dangerous complications in the future, and sometimes leads to disability or death of the patient. Treatment of sleep apnea syndrome may consist in conservative or surgical elimination of its root cause and a course of therapy aimed at normalizing breathing.