Actinic keratosis (or senile, solar keratosis) is a dermatological disease that is caused by the intense and prolonged effect of hyperinsolation on open areas of the skin and is accompanied by the appearance of flaky spots that subsequently transform into a benign tumor called keratoacanthoma. According to statistics, the disease is detected in almost 14% of dermatologist patients and develops in every fourth person over 45 years of age. At a younger age, this pathology is detected much less often.

With a prolonged course, the emerging neoplasm can self-eliminate or degenerate into skin cancer. It is the last fact about the possible malignant transformation of the tumor, which is a compaction of the stratum corneum of the dermis, that makes the problem relevant for dermatooncologists, and they call for treating the disease as early as possible. 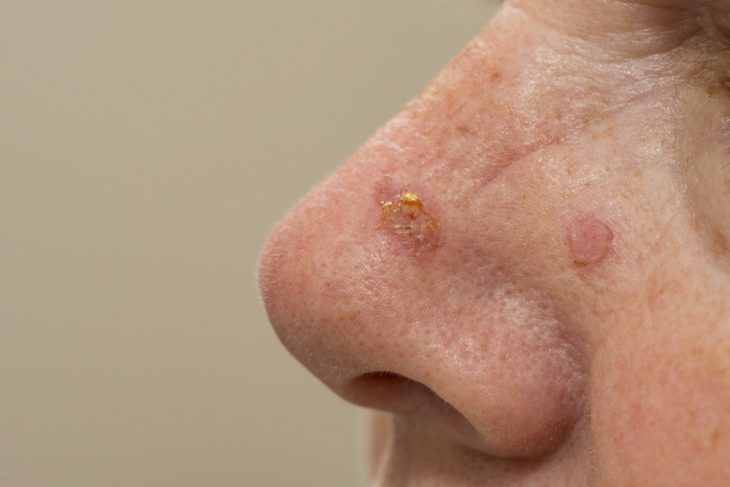 Often, actinic keratosis symptoms appear on the skin of the nose, as this part of the body is most exposed to sunlight

One of the distinctive features of actinic keratosis is its relatively comfortable course.The patient's well-being does not change in any way, and the presence of spots only causes a person concern because of an aesthetic skin defect. In addition, this disease in the vast majority of cases occurs in people after 45 years (which is why the term "senile keratosis" originated). This fact is explained by the cumulative accumulation of factors that occurs over a decade. The skin accumulates a negative impact, and only against the background of age-related changes in the immune system do the first symptoms of a "mature" problem arise.

The manifestation of actinic keratosis can occur even in those people who in recent years have not had any contact with direct rays of the solar spectrum.

The main reason for the development of actinic keratosis is prolonged solar radiation with a wave length of 280-320 nm. People experience this type of exposure when exposed to direct sunlight or in a tanning bed. Hyperinsolation leads to damage to the genetic material of keratinocytes (skin cells). Over time, the cells mutate, begin to divide uncontrollably and form foci of keratosis-compaction of the affected area of the skin.

The following factors can contribute to the development of actinic keratosis::

Experts distinguish 3 main and 4 intermediate variants of solar keratosis based on such changes in the epidermis and dermis:

The main variants of actinic keratosis are: hypertrophic, atrophic and bovenoid.

In addition to the above variants of the disease, dermatologists distinguish atypical species into a separate group.:

Actinic keratosis makes itself felt suddenly appear on areas of the skin exposed to the rays of the solar spectrum with peeling foci, which are slightly compacted reddish spots. They have clear contours and small dimensions-up to 1 cm in diameter.

In the pagetoid form of actinic keratosis, the shape of keratinized areas looks like seborrheic warts. Formations of a brown hue can be multiple or single. Scales are visualized on their surface. Warty formations rise above the skin and are easily injured. When the upper scales are removed, they start to bleed.

The course of actinic keratosis depends on the form of the disease and the state of the patient's immunity. Changes that appear on the skin can disappear without treatment and reappear after a while, or completely regress. If self-healing does not occur, then the progression of the disease is very slow. However, this fact should not mislead about the non-danger of actinic keratosis, since with any of its variants, it can cause the development of skin cancer. With malignancy of the lesion foci, an inflamed rim appears around the rash element, and the patient complains of itching and soreness.

In some cases, actinic keratosis is transformed into skin cancer

To make a diagnosis of "actinic keratosis", the following studies should be performed::

After receiving the results of the examination, a differential diagnosis is performed to exclude such dermatological diseases:

Any external manifestations of the disease are an indication for removing the focus that has appeared on the skin. The tactics of surgical treatment of actinic keratosis are determined by the form of the disease.

The following techniques can be used to remove the lesion::

If malignancy of areas altered by keratosis is suspected, the patient is recommended to be treated by an oncologist, which is carried out in accordance with generally accepted protocols for the treatment of skin cancer.

After removal of the focus of actinic keratosis, the disease may recur in the future. That is why all patients are recommended to follow up with a specialist.

If a long-term flaky spot appears on the skin, you should consult a dermatologist. After dermatoscopy and histological analysis, the doctor will be able to make a diagnosis and determine further tactics for removing the detected lesion. If malignancy of the neoplasm is suspected, the patient is referred to a dermatooncologist.

Actinic keratosis is accompanied by the formation of scaly foci on the skin, which transform into a benign tumor-keratoacanthoma. In the vast majority of cases, this dermatological disease develops in people older than 45-50 years. The prognosis of its outcome largely depends on the form of actinic keratosis and the state of the patient's immune system. Due to the high risk of degeneration of the neoplasm into a malignant tumor, surgical removal of the altered areas and medical supervision by a specialist are recommended for all patients.